In this blog post we detail all the steps needed to add a new test scenario to QUIC-Tracker. We start by defining what QUIC functionality we want to test, implement it using QUIC-Tracker and finally gather results from the existing QUIC server implementations. We use the visualisation application to inspect the results we collected.

This tutorial assumes that the reader has already installed QUIC-Tracker, is familiar with the Go programming language and the QUIC specification.

The QUIC specification states the following:

Our test will be very simplistic. It will complete a 1-RTT handshake and then send a Protected packet containing a single PING frame. Then it will check if the server issues an ACK frame confirming the receipt of this packet.

We want the test to be resilient to packet loss, so the PING frame will be retransmitted as long as no corresponding ACK frame is received. To ensure that the test is finite, we will set a timeout of 10 seconds for its completion. The test will fail if the server does not send an ACK within this time window. If the handshake does not complete, we will classify the test run as invalid, i.e. we were unable to observe the correctness of the PING mechanism, and not consider this as a test failure, i.e. the PING mechanism is not working.

A brief overview of QUIC-Tracker’s architecture

We will summarise here the architecture of the tool. More information is available in its godoc.

QUIC-Tracker is composed of three parts. The first is the main package, which contains types, methods and functions to parse and create QUIC packets that can be easily manipulated.

The second is the agents package, which implements all the features and behaviours of a QUIC client as asynchronous message-passing objects. These agents exchange messages through the broadcasting channels defined in the Connection structure. This allows additional behaviours to be hooked up and to respond to several events that occur when the connection is active. We will see how we can leverage them to easily formalise our test.

The third is the scenariipackage, which contains all the tests of the test suite. They are run using the scripts in the package bin/test_suite. The tests results are produced in a unified JSON format. It is described in details in the Trace structure documentation, but we will summarise it in this tutorial. We will add a new scenario to this package.

Each scenario is a new type that implements the Scenario interface.

The Go typing system does not allow dynamic imports. We have to add this constructor to the test suite manually. To do this, locate the GetAllScenarii function and add a mapping with the name and constructor of the scenario to its return value.

We are now missing the last important bit, the scenario code itself. We will complete the Run function step by step to achieve our goal.

This function is called each time the test is run against a particular host. It has four parameters.

For the purpose of our test, we want to establish a QUIC connection. If the tested server fails to succeed it, the test is aborted, otherwise it can proceed. The AbstractScenario type provides a helper method that achieve all of this.

We first arm a timer for the test completion. This should be the first statement of Run. Then we call the blocking method CompleteHandshake which will handle the handshake until completion or failure. The method will return a common set of agents needed for the handshake to complete. These agents are:

If the handshake fails, the method will set the error code in the test trace to the given value. A nil value will be returned in this case. Otherwise, we defer the closing of the connection at the end of the test.

Sending the PING frame and listening for incoming packets

At this point, the connection is established and we are ready to send a PING frame.

The next step is to listen to incoming packets and verify the ACK frames they may contain. Incoming packets are broadcast using the broadcast channel IncomingPackets of the connection. We have to register our own channel to receive these packets.

The logic of our test is the following. For every packet, if it is a protected packet, we iterate over the ACK frames it may contain. For each of the ACK frame, we compute the packets acknowledged. If the packet containing the PING frame is acknowledged, the test succeeds. Otherwise, we wait until the test timer fires and declares the test as failed. Go allows us to express this logic as follows.

This is a good first step, but we are missing a requirement as the PING frame will not be retransmitted in case of losses. The RecoveryAgent does not retransmit PING frame because it is not enforced by the specification. We will supplement the select statement with another linear timer of half a second that will retransmit the frame inside a new packet. Because we set a timer for the test duration, we are sure that we will not storm the tested server with PING frames indefinitely. Setting an exponential backoff instead of a linear timer is left as an exercise for the reader.

We first modify the code before the select loop.

Then we thus have to modify the ACK processing to check whether a packet containing the PING was acknowledged.

The test is now implemented, we are thus ready to run it against QUIC servers and collect its results. Several QUIC servers are publicly available in the case that you are not running your own server to test. Consulting the daily results grid of QUIC-Tracker is the easiest way of determining which server is currently available.

There exists two scripts, located in the bin/test_suite package, to run the scenario. The first is scenario_runner.go which runs a single test against a single server. For example, starting the scenario against the picoquic endpoint is the following:

The test trace is written to the given -output parameter value at the end of the test run. We detail in the next section how to use this trace. Additional parameters allows to specify a network interface to capture the test traffic into a pcap file, and to separate the Use the -h parameter to get the full usage of the script.

The test_suite.go script runs all or one scenario against several servers. A list of servers is already bundled with QUIC-Tracker. It can run the test runs in parallel, randomise their order and output all the results in a single trace file.

QUIC-Tracker outputs its results as a JSON object. scenario_runner.go outputs a trace as a single JSON object. test_suite.go outputs the traces as a list of JSON objects. The trace format is formalised as a Go structure which is then serialised into JSON. The simplest way of extracting information from the traces is to retrieve the error_code field.

There exists a web application that allows to visualise the traces, i.e. consult the decrypted packets exchanged during the test run as well as more information. To use this application with new scenarios, some metadata have to be added to the scenarii.yaml file to allow the application to annotate the test results in a human-readable manner.

We add the following block to describe this new test:

We can now give the set of traces collected by test_suite.go to the application. The JSON trace file should be placed in the traces directory, at the root of the application package. The filename must follow the format %Y%m%d.json. This is a design choice we took because the test suite was originally running daily, it is not ideal and we are working toward a more flexible solution.

Consulting the application will present the latest trace in the directory, as indicated by its filename. Showing a particular trace is achieved by navigating to /traces/%Y%m%d. 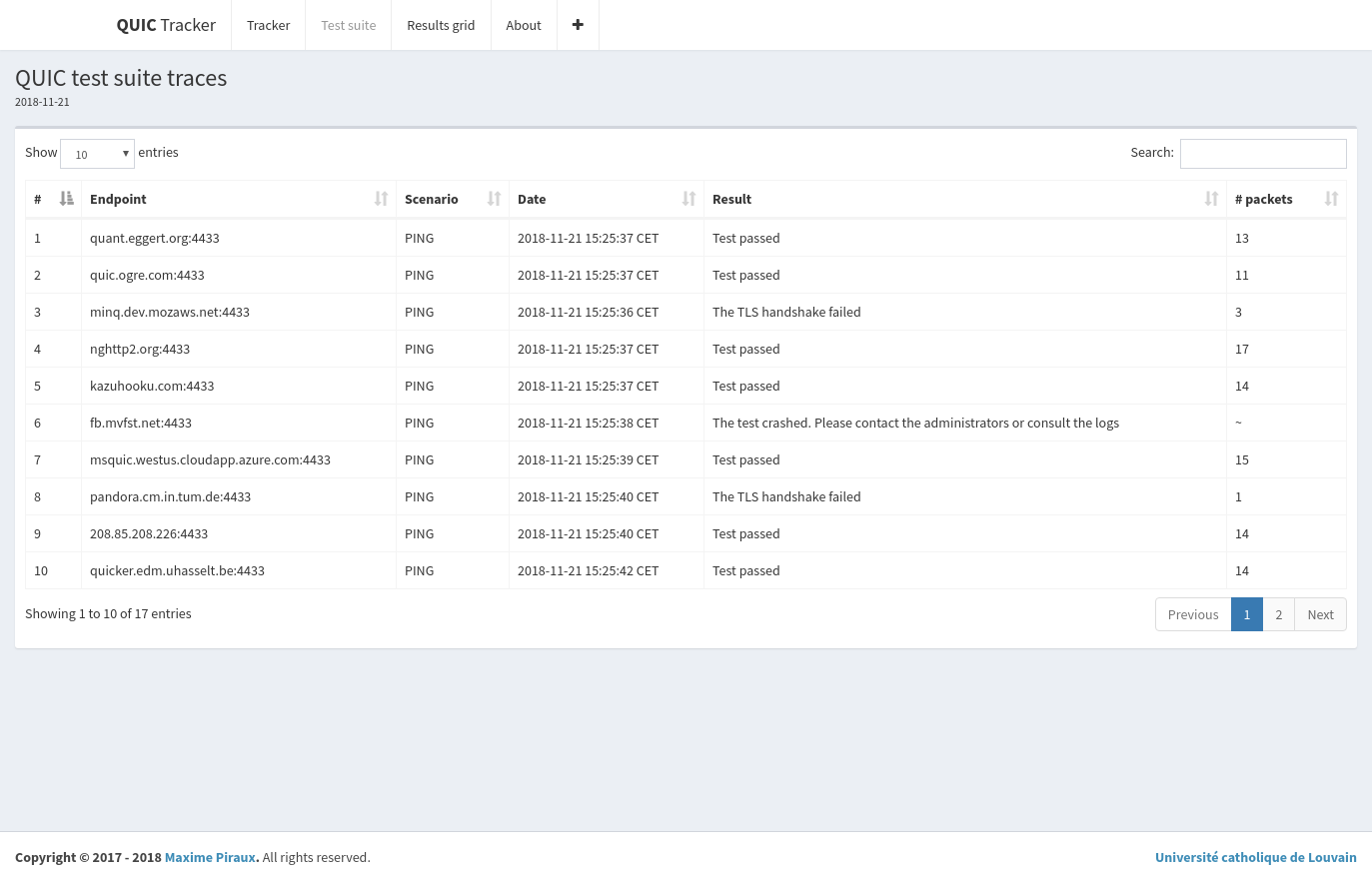 This page shows the list of traces collected. One can click on a particular trace to get more information. Clicking on the fifth trace present the following page. 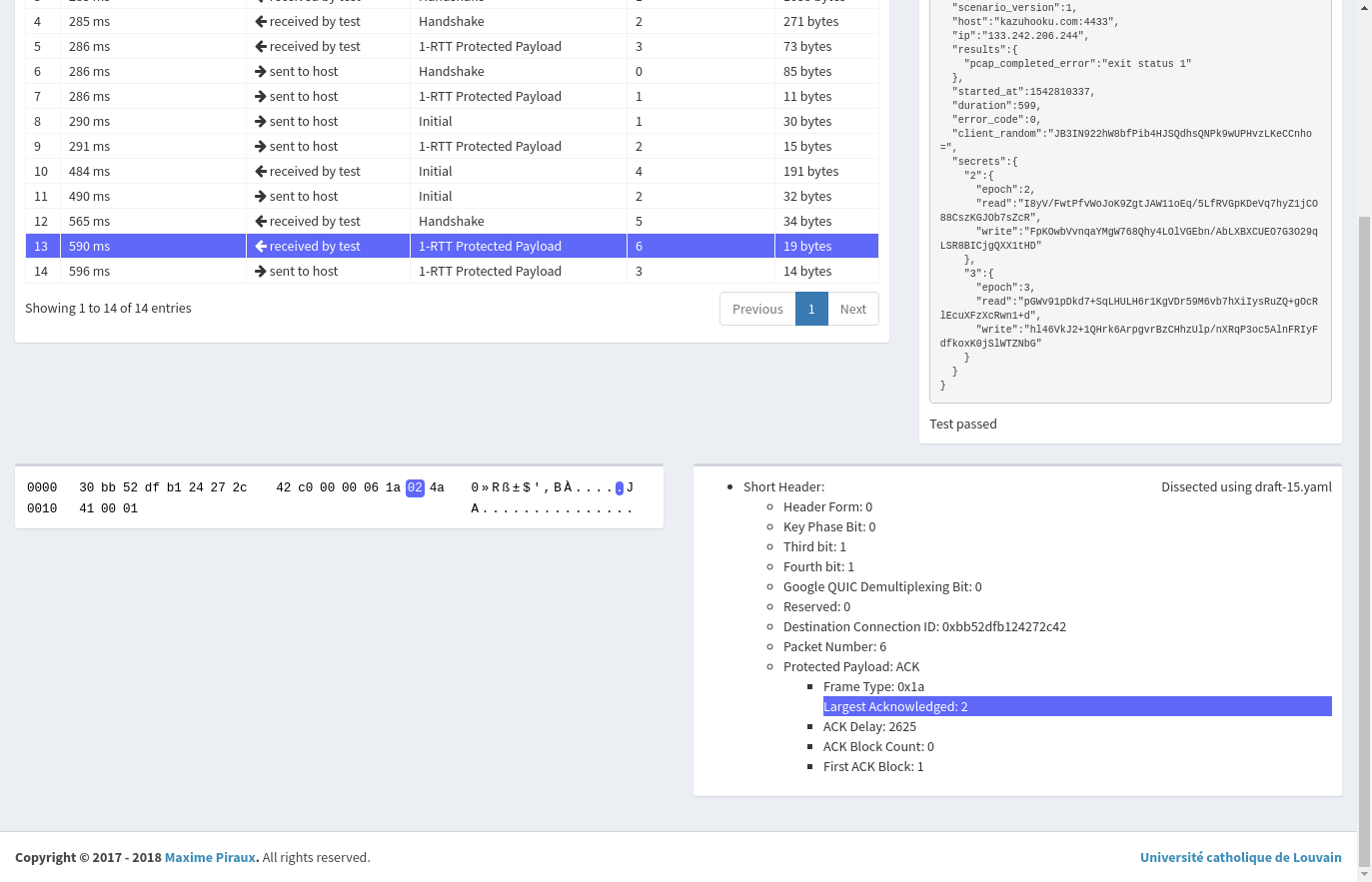 One can highlight a dissected value on the right side and its counterpart in the packet payload will be highlighted as well. In this test results, the 13th packet is the one acknowledging the packet containing the PING frame.

The test scenario we present and implement in this tutorial has been kept quite simple in the interest of space. But it can be improved in several manners. For example, the ACK_ECN frame also carries acknowledgements and is sent by the server whenever the ECN bits in the IP header of the packets it receives are set. Therefore, the test should also process these frames. The test could also be modified to always wait for the timer to expire before finishing. The receipt of an acknowledgement would only stop the transmission of PINGs in that case. It has been shown that some of our tests triggered abnormal behaviours on several implementations.

In this tutorial we explain the architecture of QUIC-Tracker and build a new scenario to test a particular feature of QUIC. We detail every step of the implementation of this test. We gather results from existing QUIC servers and inspect them using the visualisation tool. The tutorial code can be found on Github for reference.

Do not hesitate to share the experiments and new tests you developed using QUIC-Tracker. You are also welcomed to report bugs and suggest improvements on Github.